Who’s next, the Woolfs? 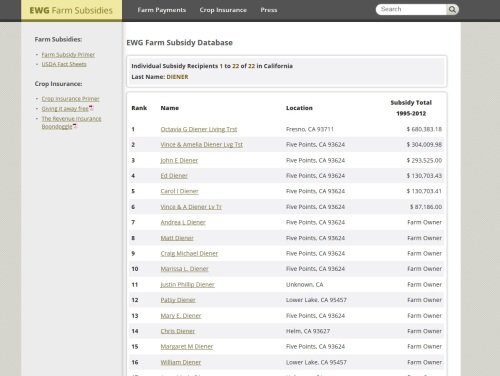 ***
OK. I threw that up there because it made me laugh that I recognized the name. There are so few people in the west side districts that the same charismatic faces have to be trotted out to the media every time. But then I felt bad for singling out one person, so I started looking harder at the rally flyer.

My objection to this rally is that it fundamentally misrepresents the intended beneficiaries:

“It’s time that farmers, farm workers and families come together and fight for the water we desperately need,” grower Wayne Western said in a news release.

You can search for each of the names on the flyer (I like to add “thousand acres”, in quotes, in hopes of finding out their farm sizes), and you’ll find that these are very large, very sophisticated operations. It isn’t farmers, farm workers and families so much as agribusiness corporations, farm workers who are paid to be there, and living family trusts. These people are media trained; they testify before Congress; they are using paid staff time to organize this.

Nothing about that is intrinsically wrong. I would listen to the argument that adjusting to climate change requires the sophistication of large agribusiness, that aggregating wealth allows farmers to have their own satellites or location-specific genetically modified seeds or half-million dollar harvesters, that modernity requires this somehow. What is intrinsically wrong is hiding behind a false image to garner public sympathy.

Worse than that, they aren’t very good at it. The #takebackourwater hashtag links to speakers that were clearly instructed to start new twitter accounts for today. The hashtag is wide open for abuse. I would love to see the Winnemem Wintu start tweeting to #takebackourwater during the rally.

I am not sure that press is good for the west side in any format. That organizer, Wayne Western. That’s a great name. Here he is, talking about solar power and brackish desal. But it doesn’t quite say what farm he’s with. On September 26th, he talked about the rally on the AgLifeWeekend radio show. He’s a foreman, 19 years. What farm is that again? At 3:36 listen to him answer “a large family farm … outfit” on the west side. It is very clear that his bosses do not want him saying where he works. (I sympathize; god knows my bosses don’t want me saying where I work.)

You know, Westlands seems all-powerful, but they get a lot of bad press. You know who I fucking never read about? Dudley Ridge, the wholly unaccountable water district. Lost Hills Water District. Those are the people who have the sense and the discipline to stay silent. Social media is two-edged.

6 responses to “Who’s next, the Woolfs?”